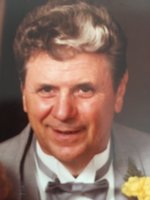 Antonio V. D’Addeo, 86, of Glastonbury, passed away peacefully at home on Friday, October 18, 2019. He was the devoted loyal husband of Theresa F. (Champ) D’Addeo for 67 years.

Described as “An outstanding man” by his wife, children, grandchildren, family, friends and all who knew him, for his kindness, honesty and hardworking values. Born in Hartford a friend to all, Tony was the son of the late Peter and Ida Depetra  D’Addeo. He was an athlete and graduate of Weaver High School and a US Army veteran, serving during the Korean Conflict. He was a former resident of Hartford and Wethersfield, moving to Glastonbury 41 years ago. Tony was a Connecticut champion apprentice who quickly worked his way into opening his own highly respected Mason Contracting Company. He was a member of the Bricklayers Union Local #1 for more than 50 years. He was an active member of Sacred Heart Church’s men’s club enjoying their charitable goals, as much as playing cards.  Antonio in retirement was asked by the town to drive Seniors  "Dial-A-Ride" which he enjoyed immensely, turning his patrons into immediate friends. He also enjoyed the Glastonbury Senior Center for many years,

In addition to Theresa,  Antonio is survived by his three sons, daughter and daughters-in-law, 7 grandchildren and 3 great grandchildren: Antonio’s son Peter D. and his wife Carmela D’Addeo of Rocky Hill, their children Peter D’Addeo, Jr. and his wife Amanda and their 2 daughters Emilia and Skylar as well their son Steven  D’Addeo and daughter Cassandra D’Addeo; Antonio’s son Daniel A. and his wife Kathryn D’Addeo of East Haddam and their children Daniel M. D’Addeo and Lauren D’Addeo; Antonio’s youngest son Joseph P. and  his wife Deborah D’Addeo of FL; his daughter, Justine A. Neild and the late Kenneth Neild of Glastonbury, and their children Kristopher and daughter-in-law Sabrina Neild and baby Eliza of Jupiter, FL and son Nicholas Neild  and Grace Zenaide and Cody of Northport, FL. Tony was pre-deceased by his oldest son Tony D’Addeo, Jr., brother Frank D’Addeo and sister Catherine Fettig.

Tony was most proud of his family and spending time participating in their activities. He enjoyed playing cards and golf with his many childhood friends both here in CT and Florida.

A memorial service will be held on Saturday, October 26, 2019 at 10:30 am at Mulryan Funeral Home, 725 Hebron Ave., Glastonbury. Burial will be in Mount Saint Benedict Cemetery, Bloomfield. Friends may call on Saturday morning from 9:00 am to 10:30 am at the funeral home. In lieu of flowers please make donations to Glastonbury Riverfront Community Center, 300 Welles St, Glastonbury, CT 06033.