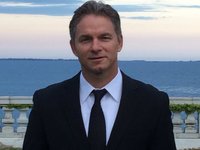 Matthew March, 50, of Glastonbury, passed away on Sunday, January 5, 2020 after a long battle with cancer. There was never a day he didn’t think he would beat it and lived everyday full of hope. He was the beloved husband of Lisa (Levine) March. Born in Chicago, IL, he was the son of Marilynn (May) March and the late Christopher I. March. Matthew grew up in Florida, graduating from Nova High School, Class of 1987. He went on to Eckerd College, earning his Bachelor’s Degree and graduating in 1991. Matthew was an avid baseball player throughout his time in High School and College. He was a partner at Anderson Meyer and spent 27 years working and living in Glastonbury. Matt will be missed by his family, friends, colleagues, clients and all the kids that affectionately and admirably called him “Coach”. He volunteered his time and talents going on to coach Hartwell Soccer, Glastonbury Little League and Glastonbury Basketball. Even though Matt was battling this disease, he made sure to never miss the opportunity to coach and watch his kids play sports. That was his most treasured past time. Matt loved his family and friends. He was generous, kind, fun loving and always had a prank or joke to tell. In addition to his wife and mother, Matt is survived by his daughter Samantha March, his two sons, Kyle and Jay March, and his step father William Driscoll, all of Glastonbury, his brother Chris March and his wife Tina of TN, his sister Michelle March and her husband Kurt Mintel of Hebron and several nieces and nephews. A Mass of Christian Burial will be celebrated on Monday, January 13, 2020 at 10:00 am at St. Dunstan Church, 1345 Manchester Rd., Glastonbury. Burial will be private. Friends may call on Sunday, January 12, 2020 from 1:00 pm to 4:00 pm at Mulryan Funeral Home, 725 Hebron Ave., Glastonbury. In lieu of flowers, memorial donations may be made to the Ronald McDonald House, 405 E73rd St., New York, NY 10021.