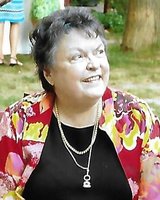 Jane Hemingway Carrier Nystrom, 86, a native of Glastonbury, loving wife for 62 years of Robert Gideon Nystrom, mother of Sarah Ruth Nystrom and William Carrier Nystrom, and wife Suzanne. Jane passed away on January 8, 2020 surrounded by her family. She also leaves her dearly beloved grandchildren, Dustin Michael Aston (Lani Hall), Daniel Zachary Aston, Madeleine Marie Nystrom, Lillian Carrier Nystrom and Hazel Elise Nystrom, as well as her nieces Jane Carrier Slocomb, Deborah Slocomb-Dohme (William) and her nephew Robert N. Slocomb, Jr. She was predeceased by her sister, Josephine Slocomb. In her younger years, Jane was very active in Glastonbury town affairs and politics. She was an early member of the Child and Family thrift shop, an officer of the Glastonbury Republican Town Committee, alternate member of the Town Planning and Zoning Committee, Board Member of the Glastonbury Visiting Nurse Association’s Welfare Advisory Board, and a life member of the Glastonbury Free Academy. In later years, Jane volunteered with the Friendship Circle at the Glastonbury Community Center. Throughout her life, Jane was active with the First Church of Christ, being over a 70-year member of the church. Jane enjoyed delving into her family history and was a prolific writer whose projects included stories from Glastonbury’s past. She was an avid reader of history books and novels. Jane’s other passion was playing bridge, which started in her college days at Endicott, with her lifelong friend, Sandra Johnson Blazensky. Between raising children, Jane worked as a medical assistant for several doctors, the longest being Dr. James Rosokoff. She thoroughly enjoyed working with patients. A Memorial Service will be held Saturday, January 18, 2020, 12 noon at the Mulryan Funeral Home, 725 Hebron Ave, Glastonbury. Burial will be at the convenience of the family. Calling hours are from 10:30am – noon, prior to the service. Donations in her memory may be made to South Glastonbury Fire Company No. 2, 905 Main St., South Glastonbury, CT 06073.