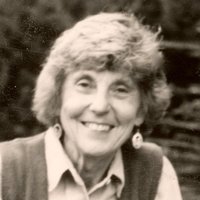 Helen Stern, 90, longtime resident of Glastonbury, died Saturday, January 25 at home, surrounded by family. Born January 11, 1930 in Gary, Indiana, she was the only child of Clara and Carl Dollstedt. After graduating valedictorian of Hobart High School in Hobart, Indiana she attended Smith College where she majored in geology. Upon graduation in 1951 she moved to New York City where she worked as a geologist on Wall Street, during which time she met her husband, Peter Stern. Their instant friendship was sealed when they realized they were both experts on bauxite ore, the world’s primary source of aluminum. They married six months later in New York and began a 41-year tour-de-force of a partnership together. She went on to teach chemistry at The Dalton School, before they moved to Boston where they started their family. After a brief stint in Tennessee, they settled in an old farm house in Glastonbury in 1968, having chosen this town for its schools and open space. In the years that followed, Helen and Peter worked toward maintaining and improving these two features of Glastonbury. In addition to raising her four children, early on she devoted herself to community service including PTO and League of Women Voters. She was known to research issues and work tirelessly behind the scenes for the Democratic party. She was always part of the get-out-the-vote effort on Election Day and she wrote scores of press releases for candidates. She loved politics and campaigns. Many local elected officials were groomed and nurtured under her tutelage. Helen, herself, served on the Glastonbury Board of Education for 22 years, four years as chairwoman, and was passionate about supporting academic programs and teachers; the music and foreign language departments in particular were very close to her heart. During her time on the Board, she participated in the oversight of several renovations of the high school and elementary schools and was involved in the selection of sites for Smith Middle School and Nayaug School. Helen was voted Democrat of the Year in 2005 yet insisted that she would accept the honor only if it could be called a joint appreciation together with her late husband, Peter, who had been a leader in environmental issues in Glastonbury and throughout Connecticut. After her retirement from the Board of Education, she continued Peter’s legacy by serving on the Glastonbury Conservation Commission, which he had served on for 21 years. Helen remained involved with the Democratic Town Committee until the end of her life. In addition to community service, she enjoyed travel, especially in the Alps with Peter, and visiting her children in distant places. She loved sewing, gardening, and swimming, and was an avid reader of both history books and newspapers. Helen was pre-deceased by her husband, Peter, and daughter, Cathy, and is survived by her children Peggy Stern of Quito, Ecuador, Rob Stern and Holly Dudrick of Austin, Texas, son-in-law Nick Schade and his wife, Robin, Jennie Stern-Hagen and son-in-law Jim Hagen of Glastonbury, as well as grandchildren, Peter Sternhagen, Sam Sternhagen and Presley Stern, and her beloved dog, Lucy. Friends are asked to join together in a celebration of Helen’s life on February 22, 2020, 2 pm, at the Riverfront Community Center, 300 Welles Street, Glastonbury, CT 06033. Memorial Donations may be made in Helen’s name to The Nature Conservancy https://www.nature.org