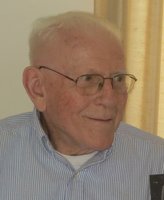 James W. Bingham, 94, of South Glastonbury, passed away peacefully on Thursday, January 30, 2020, at Glastonbury Health Care. He was the beloved husband of Carol A. (Stcynske) Bingham for 71 years. Born in St. Paul, Minnesota, he was the son of the late William J. and Julia Marie (Huber) Bingham. James was a veteran of World War II, having served in the US Army Air Corps. He was a 1950 graduate of the University of Minnesota. James was a geologist who had worked for the US Geological Survey in St. Paul, Minnesota, Tacoma, Washington and Hartford, Connecticut for thirty-five years before his retirement in 1990. He has been a resident of South Glastonbury for over forty-eight years. James was a member of the Glastonbury Conservation Commission and the Bristol Mineral and Gem Club. In addition to his wife, he is survived by his four sons: William and his wife Patricia, David and his wife Laurie, Michael and his wife Dori, and Timothy. He is also survived by four grandchildren: Christopher Bingham and his wife Kelli, Julia (Bingham) Wiester and her husband Michael, Matthew Bingham and his wife Julie, and Nathaniel Bingham, as well as his step-grandchildren Alyssa and Andrew Denaro, and three great-grandchildren, Colin and Ryan Bingham, and Penelope Wiester. James was predeceased by his sister Jean Gear. A Mass of Christian Burial will be celebrated on Wednesday, February 5, 2020, at 10:30 AM at SS. Isidore and Maria Parish at St. Augustine Church, 55 Hopewell Rd., South Glastonbury, CT. Burial, with Military Honors, will be in St. Augustine Cemetery, South Glastonbury. There are no calling hours. In lieu of flowers, memorial donations may be made to the Wounded Warrior Project, PO Box 758517, Topeka, KS 66675.