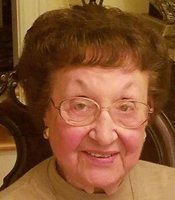 Angeline “Angie” Marie (Fuschiello) Lowry, born October 5, 1920 in East Hartford, CT passed away in her sleep after a well lived life. Angie was a worrier and always said she wanted to die peacefully in her sleep in her own bed. On February 3, 2020, her wish was granted. She kept her own home immaculate, cleaned and cooked for herself and to her family’s dismay, continued to drive short distances up until the day before she died. She did it her way! She was the daughter of the late Giacomo “James” and Maria Rose (Ciani) Fushiello. Angie was married to John Reuber, Sr. and they had a son, John C. Reuber. She married James Lowrie and when Jim passed in the 1980s, she was fortunate to have met Frank Lowry, Sr. Their standing joke was their similar last names. After Frank passed, she decided to stay alone and live her life as she wanted. Angie leaves her beloved son, John C. Reuber and his wife Linda of Glastonbury, Granddaughter Krista Timken and her husband Kurt, along with her Great Grandson Grayson Timken, all of Glastonbury, and Grandson John Craig Reuber of Willington, along with his son Great Grandson John Carter Reuber as well as several generations of nieces and nephews to mourn her. She was predeceased by her sisters Theresa Longo , Martha Gentile, Viola Behrendt, Carmella Goodwin, Gloria Barrows. The family will always be grateful to her friends and neighbors, Robert and Charlene Reckard, for keeping an eye on her and for their loving friendship. Angie was also thankful for them always being there for her. Special Thanks to Fr. George Couturier for his friendship and dinner companionship. A Mass of Christian Burial will be celebrated on Friday, February 7, 2020 at 10:00 am at St. Dunstan Church, 1345 Manchester Rd., Glastonbury. Burial will be in Hillside Cemetery, East Hartford. Friends may call on Thursday, February 6, 2020 from 4:00 pm to 7:00 pm at Mulryan Funeral Home, 725 Hebron Ave., Glastonbury. Memorial donations may be made to a charity of the donor’s choice.