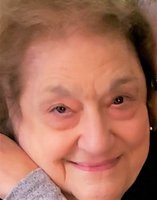 Marion Francis Rita, 89, of Glastonbury, passed away February 8, 2020, with her family by her side. She was born to the late Daniel and Jenny Gautieri, October 9 1930, in Hartford, Connecticut. Marion graduated from Bulkeley High School in 1948. She then married the late Anthony Dominic Rita in 1951 and they lived together in East Hartford for many years before relocating to Glastonbury in 1972. Marion is survived by two children - Daniel Anthony Rita and his wife Lisa of Glastonbury and daughter Pamela Rita Green of Milford, New Hampshire and her sister Tina Cianfaglione of Wethersfield. She is also survived by her grandson John Michael Rita of Burlington and other nieces, nephews and cousins. Marion was predeceased by her loving husband Anthony in 2017 and brother William Gautieri. Marion worked for many years at the Travelers Insurance Company in Hartford and spent her later years enjoying her family and traveling the country with her husband. She was a loving mother, grandmother and spouse and will be missed by all. A private ceremony for family only was held at the Mulryan Funeral Home on February 13 with burial at Green Cemetery. The family requests that in lieu of flowers people make donations in support of breast cancer research.