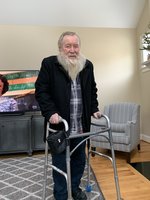 Jerry Lee Mulligan, a resident of Glastonbury, Conn., died peacefully on Saturday the 29th of February at Hartford Hospital. He was 78 years old. Born in Coal City, Ill., Jerry spent his youth hunting, trapping and fishing around the forests of Plainville, Ill. As a young adult, he hitchhiked across the country for work and adventure. In Los Angeles, he worked on the Sunset Strip at Gene Autry’s Hotel Continental – once driving Autry’s Cadillac with “silver-dollars on the dashboard and longhorns on the grill”. Among many jobs, he spent time in Texas where he worked as a roofer under sweltering conditions. His travels took him as far as New Jersey – across the river from the Statue of Liberty. Ultimately, he settled in Kankakee, Ill., and started a family. Jerry had an extraordinary work ethic, never missing a day of work regardless of circumstance. He was a skilled carpenter, painter, and a longtime caretaker of City Tavern in Kankakee, Ill. While in Kankakee he became a well-known fixture of the community. He could be found outside walking every day of the year in all types of weather. In 2013 he moved to Glastonbury, Conn. to live near his youngest daughter and two of his grandsons. He quickly became a familiar face for the residents of Glastonbury who dubbed him “The Mayor of Main Street”. He could be seen reliably every day walking from his home on Knox Lane to the Glastonbury Coffee Shop – with plenty of stops at the benches along the way. One could often see him talking with passersby, waving at passing cars, blowing kisses at girls, or just acting goofy to make people smile. Every year around Christmastime, Jerry would dress up as Santa and hand out candy canes to people he saw on his path. Jerry was preceded in death by his father Leon Mulligan, his mother Zona Mae Webb, and his brothers James, Robert and Leon Mulligan. Jerry is survived by his son Brian Edward Mulligan, his daughter Deborah Mulligan Gonzalez, daughter Brenda Mulligan Poriss, and grandchildren Jamie Michael Mulligan, Alora Doud Desrosiers, Jose Alejandro Bautista, Jesse Troy Doud, Collin Edward Mulligan, Emmanuel Cruz Bautista, Riley Jo Mulligan and four great-grandchildren. To paraphrase the Glastonbury Citizen, Jerry would remind you to stop and enjoy the simple things, like a friendly interaction, a clean neighborhood, or the birds resting on the Hubbard Brook. He will be cremated according to his wishes, and laid to rest at the Green Cemetery in Glastonbury. Calling hours will at the Mulryan Funeral Home, 725 Hebron Ave., in Glastonbury on Tuesday, March 3 from 6PM to 8PM. Funeral service will be held Wednesday, March 4 at 11am. Burial will follow in Green Cemetery. All of his many friends from the community are welcome to come share their memories. His guestbook will be available at mulryanfh.com.