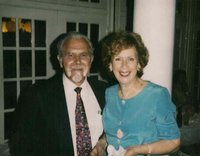 Joseph J. Thomas, 89, passed away on March 17, 2020 and his wife, Julia (Tomlinson) Thomas, 86, passed away on December 20, 2019, both of East Hartford. They were happily married for over 66 years. Born in Hartford, Joseph was the son of the late Joseph and Mary (Santascroce) Thomas. Julia was born in Indiana and the daughter of the late Merrill and Juanita (Kennedy) Tomlinson. They were former residents of Hartford, moving to East Hartford over 60 years ago. Joseph was a Master Electrician and shop manager, while Julia was a supervisor in the purchasing department for Hamilton Standard. Joseph was an avid kite flyer, an accomplished archer, had his power squadron’s license and was a veteran of the U.S. Navy. Julia was a talented seamstress, an avid crafter and a loving caretaker to both her grandchildren and great granchildren. Both Joseph and Julia loved music, dancing, telling jokes, and being surrounded by their family. They are survived by two daughters; Patricia Ruddy and Robin Kitchen and her husband Terrance, both of East Hartford, Connecticut; their three granchildren, Stacey Maher of South Windsor, Matthew Kitchen of East Hartford and Alexander and his wife, Ariann of Hamden, Connecticut; and their great granchildren, James and Rachel Maher of South Windsor, Connecticut. Julia also leaves behind her brother, Steve Clark of Indiana, and three sisters; Janet Jones of Virginia, Carol Annarino of Virginia, Louise Rochford and her husband, Tom of Texas. In addition to their parents, Joseph and Julia were predeceased by their son-in-law, John Ruddy, as well as, Julia’s sister, Jane Steele and Joseph’s brother, Paul Thomas. Funeral services and burial will be private. There are no calling hours. In lieu of flowers, memorial donations may be made to either the Alzheimer's Association National Capital Area Chapter at 8180 Greensboro Drive, Suite 400. McLean, VA 22102 or the American Heart Association, 300 5th Avenue, Suite 6 Waltham, MA 02451.