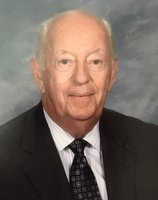 Paul F. Cosgrove, 88, of Ellington CT, beloved husband of the late Barbara H. Cosgrove, passed away peacefully at Woodlake at Tolland under hospice care on Thursday March 19, 2020. He was born January 20, 1932 in Cambridge, MA. Paul graduated from Cambridge Latin High School in 1949 and from Bryant & Stratton School with an associate degree in accounting in 1951. Paul met the love of his life Barbara at a party and that began their lifelong romance until Barbara’s passing in 2001. Paul and Barbara married in February 1953 before he headed overseas to proudly serve in the US Army in the Korean War. After his discharge, Paul realized that working behind a desk was not for him and began his career as a salesman which suited his outgoing personality. Paul enjoyed meeting new people from clients to the person sitting next to him in a restaurant. In his final months he enjoyed the conversations he had with the people at Woodlake. Paul and Barbara moved to Manchester, CT in 1960 where they made lifelong friends and ties to the community. Gerard Street was a great place to raise their children. There were a lot of good times, from the gatherings on the Parker’s porch, Christmas luminaria caroling, potluck picnics and competitive games of croquet. Paul was an active parishioner at St. Bartholomew Church of Manchester and then St. Dunstan of Glastonbury. Paul was a member of many social organizations including the Elks Club, Kiwanis Club and Lions Clubs of Glastonbury and South Windsor. Paul was a sports enthusiast; whether participating or from the sidelines. He played semi‐pro baseball in high school and was a devout Boston Braves fan. Paul coached youth sports and refereed lacrosse and hockey and was a football official for many years. He was the parent who acted like a kid and participated in all neighborhood activities from street hockey to a basketball game of horse. When he could no longer participate in the sports he loved, he was a dedicated fan from the sidelines. Paul remained active in local football attending Ellington high school games and was a member of the National Football Foundation and College Hall of Fame that honored high school athletes. Paul loved music and dancing. He was the first to get on the dance floor which often included the kitchen where he could be found with Barbara. Paul leaves behind his loving family: his daughters, Ellen Cosgrove of Wethersfield, Joanne Gourley of Manchester, and Karen Cosgrove of Avon and grandchildren Michael and Stephanie Gourley, Steven Gourley and Megan Gourley. He also leaves his son Gerald Cosgrove and wife Rita of Plano, TX and grandchildren Sarah and Samantha. His family would like to express its heartfelt gratitude to the wonderful staff at Woodlake at Tolland, especially Laurie and Jermaine, along with the hospice professionals for taking such great care of him. Funeral services will be private. At a later time, there will be a memorial Mass and a celebration of life at a future date. In lieu of flowers, please made donations to the Lions Low Vision Center (an affiliation of the Lion’s Club), 33 Highland Street, New Britain, CT 06050.