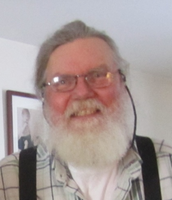 Raymond DeMont, 64, of Columbia, passed away peacefully at home surrounded by his family. Born in Hartford, he was the son of the late Wallace and Mabel Helen (Quail) DeMont. Raymond was a graduate of Glastonbury High School and a former resident of Glastonbury, moving to Columbia thirty-five years ago. He worked as a General Contractor and Carpenter, specializing in residential remodeling. Whether he was on his tractor, working in the hay fields or tending to his trees in preparation for the Christmas season, Raymond enjoyed his time at home on the farm. Raymond is survived by his three daughters; Susan Bolster of Middletown, Leslie Bolster of Ellington and Kelly Bolster Leach of Middletown, his two brothers Donald DeMont and his wife Dolores of South Windsor and Steven DeMont of Columbia, as well as his very close friends Richard and Barbara Frye and their family. Funeral services and burial will be private. There are no calling hours. Memorial donations may be made to the American Cancer Society, 75 Davids Dr, Hauppauge, NY 11788, or the Hartford Health Hospice, 1290 Silas Deane Highway, Wethersfield, CT 06109.