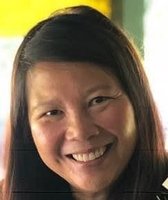 Van Tuyet Hegel, 55, passed away peacefully at home in Glastonbury, Connecticut on June 25th, 2020 after a long and courageous battle with brain cancer. Van was born on September 26th, 1964 in Vietnam to Mai Hoang and Lai Nguyen. She left Vietnam at 5 years old, spending time in Ohio before settling in Winnipeg, Manitoba for most of her youth. Her life was transformed in 1991 when her son Jordan was born. She devoted all of her energies and passions into being the best mother she could be, and in giving Jordan the happiest and healthiest upbringing possible. In 1996 Van met Steve Hegel over the Internet, and despite so many differences and a gap of 625 miles, they fell deeply in love and were married in 1997. Van and Steve moved to New Jersey and were blessed when their son Justin was born in 2000. The family settled in Glastonbury, Connecticut where she lived the last 16 years of her life. Van was so proud watching her two boys grow up into fine young men, and her family was the center of her life and the source of so much of her purpose. Van worked for Keenan Law in South Glastonbury as a paralegal, and enjoyed all aspects of her work but in particular she was devoted to her clients and made it a personal mission to see to their well-being. Outside of motherhood, her true passion was traveling the world. Whether with her family, with a dear friend, or intrepidly on her own, she was happiest exploring new places and immersing herself into new cultures. Out of her many destinations, she had a special affinity for Hawaii, where she found peace and joy under the palm trees and in the surf. In addition to her husband and parents, Van is survived by her two children, Jordan Alexandre and Justin Cooper; her brother K. Matthew Hoang; her sister N. Meaghen Ganey and her husband Patrick; and beloved friends who enriched and brightened her life, and provided profound support and comfort during her illness. Her family has the deepest gratitude to her neuro-oncology team at Dana Farber Cancer Institute in Boston, as well as the neuro-oncology, hospital and hospice care teams at St. Francis Hospital. Funeral services will be private. Friends may call at the Mulryan Funeral Home, 725 Hebron Ave., Glastonbury from 4:00 pm to 6:00 pm on Wednesday, July 1, 2020. In order to adhere to continued COVID 19 mandates, masks are required, six feet of social distancing along with having a maximum of 50 people in the funeral home at a time. In lieu of flowers, memorial donations may be made in memory of Van Hegel to support Dr. David Reardon's Neuro-Oncology Research Fund at Dana-Farber Cancer Institute, P.O. Box 849168, Boston, MA 02284 (please make checks payable to Dana-Farber and include Dr. Reardon's fund in the memo section).