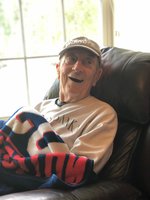 Frederick (Ted) R. Maher, 89, of Marlborough, beloved husband of Mary (Keane) Maher, died July 23, 2020 at St. Francis Hospital. Born May 28, 1931 in Ashley, PA, son of the late Frederick and Kathleen (Everett) Maher, Ted soon moved with his family to Lewiston, ME, where he grew up with his seven brothers and sisters. Ted graduated from Lewiston High School, Maine Central Institute Prep School, and the University of Maine, where he starred as the Black Bears’ tailback and set records in track and field. He turned down an offer to try out for the Baltimore Colts to instead pursue his career in education. Ted moved to Hartford, CT after accepting his first teaching position, and attended the University of Hartford, where he attained his sixth year Masters Degree in Education. He worked for nearly forty years in the Hartford school system, serving as Vice Principal at multiple schools and retiring as Principal of Henry C. Dwight School in 1992. Ted and Mary moved to Marlborough, CT in 1993, enjoying travel and being close to family. Besides his wife he is survived by his two sons and their wives, David M. and Cathy Maher of Colchester, Kevin R. and Tracy Maher of Hebron, two sisters Kathleen Ryder and Aileen Maher both of Maine, two sisters-in-law Irene Maher of California and Elayne Maher of Florida, Cousin Ralph Tuttle of Maine, seven grandchildren and their spouses/partners, Danielle King-Watkins and Adam Watkins of Colchester, Kelly and Anthony Fontana of East Hampton, Casey Verito of Groton, Caitlin and Patrick Custy of Portland, Meaghan Maher and her fiancé Theus Banks of Hebron, Daniel Maher and his partner Brenda Nguyen of West Hartford, Kelsey Maher and her partner Sebastian Olczyk of Glastonbury and twelve great grandchildren, Mckenzie, Brendan, Eli, Thomas, Dylan, Aubrey, Julia, Brayden, Kenzley, James, Emma and Madison. He was predeceased by his siblings, Richard, Brock, James, Nancy and Maureen. Ted was also adored by his numerous nephews and nieces, as well as all who met and knew him. Funeral service will be private and there are no calling hours. In lieu of flowers memorial donations may be made to the Alzheimer’s Association, 19 Ohio Avenue, Norwich, CT 06360. For online condolences please visit www.mulryanfh.com.