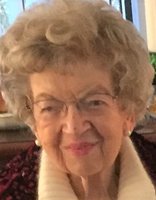 Margaret M. “Peggy” Kessler, 95, of Manchester, died Monday, August 31, 2020 at Hartford Hospital after a short illness. Born November 21,1924 in the Bronx N.Y., daughter of the late Everett and Margaret (Smith) Adams. She was predeceased by her husband Jack, of nearly 70 years, and her granddaughter Doreen Nicholson. While working, Peggy was a teacher’s aide, a CCD teacher and an Office Assistant at Southbury Visiting Nurse’s Assn. She was a Eucharistic Minister at St. Dunstan’s Parish and was an active participant at the Glastonbury Senior Center, where she scored a perfect Wii Bowling score of 300, at age 90. Peggy is survived by her son and daughter in law, Thomas and Lisa Kessler of Colchester and their daughter Sara and her partner Robert Kennon of Oakdale, her daughter Eileen Lee and her partner Joseph Wroblewski of South Windsor and her children and their spouses, Colleen Lee of Ellington, Richard Nicholson of Smithfield RI, Patrick and Jenneen Lee of Broad Brook, Shaun and Jennifer Lee of Lexington, MA and eight great grandchildren, Ashley, Jessica, Rachel, Megan, Ryan, Richie, Connor and Katie. Services will be private. A Memorial Service will be held at a later date. Memorial contributions can be made to The Smithfield Education Foundation, Doreen Nicholson Scholarship Fund, ℅ Smithfield School Dept., 49 Farnham Pike, Smithfield, RI 02917, or to the Glastonbury Senior Center.