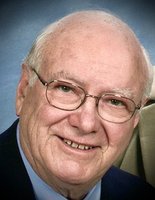 Fullerton, Frederick F., of Cedar Mountain Commons, Newington, CT, passed away on September 4, 2020. Born in Providence, RI on November 27, 1929, he was the son of the late Albert “Richard” Fullerton and Calista (Eaton) Fullerton. He was the brother of the late Anna Fullerton and the late Norman Fullerton. Fred grew up in Providence and the Pawtuxet neighborhood of Cranston, RI. His career began with Browne & Sharpe Co. in Providence. He then worked for the Kendall Co. in Walpole, MA, and, for most of his career, the William Carter Co. in Needham, MA, where he held several positions in both management and sales until he retired in 1993. Over the years, Fred and his family lived in several states before moving in 1986 to Glastonbury, CT where he eventually retired and lived until 2016. Fred’s favorite pastimes were golf, bowling, and following the Boston Bruins, Red Sox, and the New England Patriots. He also had been a member of the Azure Masonic Lodge in Walpole, MA. Throughout his long life, he read at least two newspapers daily and rarely missed the evening news while sipping a glass of what he euphemistically called his “lumbago medicine.” Business meetings to the Caribbean and South America, awakened a love for travel. After retiring, Fred and his wife Thelma enjoyed frequent traveling to Florida, throughout New England, and to Canada, as well as to Scandinavia, Russia and other European countries. Fred was the loving husband of the late Beverly J. (Dexter) Fullerton and the late Thelma E. (Sjoberg) Fullerton. He is survived by five children: Frederick and his wife Joan; Susan and her husband James Arndt; Jon; Kristine and her husband Wade Bilenki; and Mark and his partner Danielle Thorton. He is survived by his brothers Albert Fullerton and Peter Fullerton. He also leaves behind five grandchildren Michael, Eric, and Justin Arndt; and Kyra and Rachel Bilenki, as well as several nephews, nieces, and a cousin. A private memorial service will follow at a later date. For online condolences please visit www.mulryanfh.com.