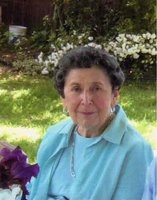 Eleanor (Ferrari) Reale, 92, of South Glastonbury, beloved wife of Ernest F. Reale, died Tuesday October 6, 2020 at Hartford Hospital. Born August 27, 1928 in Windsor Locks, daughter of the late Domenic and Mary (Preli) Ferrari, she had lived in South Glastonbury most of her life. Eleanor led a full and active life as a mother, grandmother, homemaker and held a professional position in the insurance industry. She graduated from Glastonbury High School in 1945 and was valedictorian of the class of 1949 at the University of Saint Joseph in West Hartford. Eleanor was active in Saint Augustine’s Church in South Glastonbury, was a longtime volunteer at the South Glastonbury library and a member of the knitting group at the senior center. In addition to knitting, she enjoyed sewing, quilting and cooking. An avid historian and voracious reader, Eleanor and Ernie, her husband of 68 years, traveled to many historic locations throughout the United States and abroad during retirement. Eleanor was a devoted grandmother who enjoyed attending her grandchildren’s various activities, but was happiest hosting family get-togethers at her home during the holidays. Besides her husband, she is survived by 3 sons and their wives, Lawrence and Joan Reale of Norfolk, MA, Christopher Reale of Windsor, Andrew and Pamela Reale of South Glastonbury, a brother Richard Ferrari and his wife Joyce of South Glastonbury, 8 grandchildren, Lindsey Reale and her husband Allen Senechal, David Reale, Natalie Reale, Emily Reale, Daniel Reale, Peter Reale, Mark Reale, Joseph Reale, a great-granddaughter Mila Reale and several nieces and nephews. She was predeceased by her brother Robert Ferari and his wife Beatrice, and her daughter-in-law Mary Reale. Funeral and burial will be private. Friends may call at Mulryan Funeral Home, 725 Hebron Ave., Glastonbury, on Sunday, Oct. 11, from 3-5 pm (mask and social distance will be required). In lieu of flowers, memorial donations may be made to South Glastonbury Public Library, 80 High St., South Glastonbury, CT 06073, Glastonbury Senior Center, 300 Welles St., Glastonbury, CT 06033 or Ss. Isidore and Maria Parish (St. Augustine Church), 2577 Main St., Glastonbury, CT 06033. For online condolences, please visit www.mulryanfh.com.