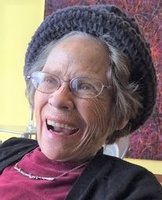 There’s a wonderful proverb: “When death finds you, may it find you alive.” There may be no better saying for Ruth Eleanor Simpson Woodcock, 83, who died just before dawn on Monday, October 26, 2020, at her home in South Glastonbury, CT. Born in Washington, D.C. on June 3rd, 1937, she was the daughter of the late Marjorie (Ewen) Simpson and Stephen Milton Simpson. Ruth lived with color and style, and no small amount of optimism. She laughed deeply. As a child she spent summers on Fire Island, and loved her school, Sidwell Friends, where she was the captain of the tennis, field hockey and basketball teams. It was at Friends that she was introduced to art history, which became a lifelong passion. A voracious intellect, she was a 1955 graduate of Friends and a 1959 graduate of Bryn Mawr College. At Bryn Mawr she met her first husband, Hugh Ogden, a budding poet from the Midwest who was attending Haverford. She married her second husband, Chris Woodcock, in 1981. Of their honeymoon in Nepal and India, she would say that while looking at the Himalayas she’d never felt closer to nirvana. Ruth’s ambition and courage took her wherever she could get, and to see whatever she could see. She earned a paralegal certificate, but the law never held a candle to art, and she went on to earn her Master’s Degree from Wesleyan University at the age of 72. She took great pride in her work as a docent at the New Britain Museum of American Art, researching and giving lectures on various American artists. Ruth enriched the lives of everyone around her, regularly hauling them away from the humdrum of everyday life to attend concerts, art exhibits, and plays. She even introduced her Russian literature professor to obscure American artists, taking her and her husband to shows at the NBMAA. In early 2020, before the pandemic shutdown, she squeezed in a visit with family to a J.M.W. Turner exhibit. Late in her life Ruth often listened to classical music and mysteries by Agatha Christie, but was game for anything. In 2019 at the age of 82, she went with her son to a Gov’t Mule rock concert. Ruth will be remembered for her gentle way and absolute and unconditional love. She alone was with her sibling Steve in the 1970s when Steve had surgery and transitioned to Anne. Ruth was predeceased by two sisters, Anne Simpson and Grace Watters, her husband, Chris, and a grandson, Joshua Ogden. She is survived by a sister, Marjorie Manuel of Bainbridge Island, WA, and her three children: Cynthia Ogden (Christopher Lord) of Chevy Chase, MD, David Ogden (Gwen Ogden) of Colchester, CT, and Katherine Ogden (Mark Packard) of South Glastonbury, CT. She is also survived by six grandchildren: Benjamin and Katya Ogden-Lord, Scott Ogden (Aarthi Raju), Aaron Ogden (Yousef Muyco), and Amelia and Theo Packard, as well as a great-grandson, Jay Ogden. Because of the pandemic, services are private. In lieu of flowers, memorial donations may be made in Ruth’s name to Sidwell Friends School, 3825 Wisconsin Ave, Washington, DC 20016, https://www.sidwell.edu/, or the New Britain Museum of American Art, 56 Lexington St, New Britain, CT 06052, https://nbmaa.org/.