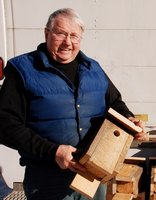 Donald A. Keller, 78, of Glastonbury, passed away unexpectedly on Thursday, November 19, 2020. He was the beloved husband of Denise (Brown) Keller for almost 57 years. They were Glastonbury High School sweethearts who eloped in 1963. Born in Hartford, Donald was the son of the late Carl and Jennie (Evans) Keller. He was a lifelong Glastonbury resident and worked as a Carpenter for many years. In addition to his wife, Donald is survived by his daughter Donna Keller Savage and her husband Michael of Glastonbury, his son David Keller of Glastonbury, his three grandsons; Joshua, Jacob and Joseph, his sister Nancy Driscoll and her husband Robert of Farmington, his dear friend and brother-in-law William Glowacki of Niantic and several nieces and nephews. He was predeceased by his sister Janet Taylor. Salt Of The Earth is the most frequent term people who encountered Donnie used. He was the most generous man, always so eager to give you what you needed and whatever he had. An extremely hard and proud worker, he loved fishing, hunting, dancing with his wife, and any dog he could sneak a treat to. He left a mark on just about any person he encountered. Funeral services will be held on Tuesday, November 24, 2020 at 11:00 am at Mulryan Funeral Home, 725 Hebron Ave., Glastonbury, seating will be limited. Burial will be at the convenience of the family. Friends may call on Monday, November 23, 2020 from 4:00 pm to 6:00 pm at the funeral home. In order to adhere to current COVID 19 mandates, masks are required and six feet of social distancing will be maintained. In lieu of flowers, memorial donations may be made to the Alzheimer’s Association, CT Chapter, 200 Executive Blvd S #4b, Southington, CT 06489.