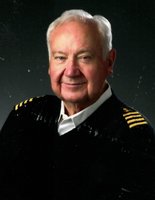 Max Fentress, 81, passed away at home in East Hampton, Connecticut on February 13, 2021 in the care of people who loved him.

Born in Jasper, Indiana, he was the son of the late Shelton Ira and Victoria Roxa (Freeman) Fentress.  He was raised in New Albany, Indiana and as a youth, Max was an active amateur boxer who appeared on the local television boxing shows and in various tournaments.  He was a Golden Gloves middleweight champion in 1955.

On high school graduation, Max received a U.S. Navy scholarship to train for a career in the navy and to attend the University of Louisville, where he graduated with a B.S. degree in Mechanical Engineering.  Later he earned an MBA degree at the University of Hartford.

Max met the love of his life, Nicole Bégin, at a midshipman ball at the Ménage Militaire citadel in Quebec City, Qc Canada.  Max proposed to Nicole on the Plaines d'Abraham.

After the navy Max and Nicole made their home in Connecticut where he enjoyed a full engineering career at Pratt & Whitney where he was a JT8D engine design engineer and other manager assignments including recruitment, college relations.  Max and Nicole traveled extensively in North America and Europe. They lived in five homes located in four states and in Sweden.

On taking early retirement from Pratt & Whitney, Max became a teacher. He taught biology, chemistry, physics, and calculus in high school and college for several years.  He enjoyed a second retirement.

Max’s sea experiences caused him to encourage others to enjoy the sea. Thousands of mariners have benefited from his American Boatschool during a twenty five year period. This school/charter company offered mariner instruction and sail training at various locations along the New England coast

He was a lifelong learner with interest of French-Canadian culture and his wife’s native language.  His studies included full French immersion programs at his home by Nicole and at Université Laval in Quebec.  Max was a published genealogist for his grandparents’ family lines that extend over nine generations.  He was a 40 year member of the Saint Patrick Church, East Hampton and Saint John Fisher Church, Marlborough.

Max will be remembered as a person who lived the traditional virtues, and all will recall him ready to laugh.  All will recall the pleasure he derived from Nicole, Eric and Brian, his family and his many friends.