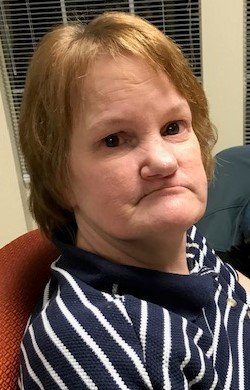 Penny L. (Welch) Chapman, 53, of Glastonbury, passed away peacefully at Marlborough Healthcare on Wednesday, March 20, 2019 after a long courageous battle of Multiple Sclerosis.  She attended and graduated from Glastonbury High School and later on was employed by the Town of Glastonbury.  Penny was a devoted daughter, sister, aunt and friend who was very talented and known for her paintings, handmade blankets, baking and decorating cakes and other craft items that she loved making for family and friends.  She will be sadly missed by her father, Robert Welch and his wife Jenny of Glastonbury, Her sisters, Sheryl Buckley of Stafford Springs, Debbie Ferwerda of Coventry, Robin and her husband Kreg O’Brien of Colchester as well as several nieces, nephews, cousins and of course many friends.  Penny was predeceased by her Mom, Judith B. Welch, both sets of her grandparents and several aunts and uncles.  A Funeral Service will be held Monday, March 25, 2019 at noon at the Mulryan Funeral Home, 725 Hebron Ave, Glastonbury.  Burial will follow in Buckingham Cemetery, Glastonbury.  Family and friends may call at the funeral home on Monday before the service from 10:00 am to noon.  Because Penny had an immeasurable love for all kinds of animals, taking in strays along the way and raising them, in lieu of flowers please consider making donations in Penny’s memory to the ASPCA or a local animal shelter.

Share Your Memory of
Penny
Upload Your Memory View All Memories
Be the first to upload a memory!