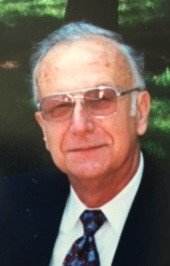 Donald J Znamierowski, 84, of Glastonbury, passed away on April 25, 2019, at his home, in the company of his loving wife Arnhild.

Don was born on November 8, 1934 in Enfield CT, the son of Joseph and Caroline Znamierowski. He graduated from Enfield High School before obtaining BA and MBA degrees from the University of Connecticut and the University of Massachusetts, respectively. After graduating from the University of CT, he married the former Barbara Elizabeth Logee of Summerville, NJ and after living briefly in Enfield, CT they moved with their two young sons to Glastonbury in 1968 where he resided for 52 years in the family home. The family enjoyed frequent outings to Vermont where Don built a small cabin and the family discovered the wonders of Vermont including skiing, snowshoeing, and hiking. His sons fondly remember breaking rocks in the hot sun during summer visits to help dig foundations and drainage ditches for the cabin. Mr. Znamierowski worked for the Hartford Life Insurance Company in Hartford and Simsbury, CT prior to retiring as VP and Comptroller in 1995. He was previously employed at ITT Corporation as Comptroller of International Insurance Operations. In 1995 he married Arnhild Tomberg. After retirement he and Arny enjoyed traveling extensively in the US and abroad. Together they spent many happy winters in Florida and summers in Dayville, CT at the family cottage on Alexander Lake. At the cottage, Don and Arny delighted in hosting annual reunions for the extended family. Later in life Don and Arny discovered a shared passion for bicycling. They were members of several biking groups and enjoyed the comradery of their many biking adventures.

Share Your Memory of
Donald
Upload Your Memory View All Memories
Be the first to upload a memory!