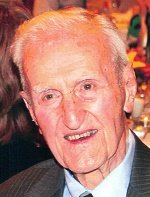 Andrew J. Dutka, 95 of Glastonbury passed away at home on Thursday June 6.  Andrew was born March 16, 1924 in Griswold CT, son of the late Andrew & Mary Dutka.  Andrew served his country in the 101st Airborne Division of the Army as a paratrooper from 1943-1945 and participated in the Battle of the Bulge and the Battle Market Garden.  Upon returning from his service in the war, he attended Indiana Institute of Technology in Fort Wayne, IN and earned degrees in Mechanical and Civil Engineering.  He was employed for 37 years at Pratt & Whitney in East Hartford retiring in 1987 and spent many years in retirement gardening, beekeeping, and tinkering. A resident of Glastonbury for 53 years, Andrew was a member of St Paul Roman Catholic Church.

Andrew is survived by his loving wife of 62 years Lorraine (Desrocher) and his 4 children Lynn Boudreau and husband JC of Richmond, NH, James Dutka of New York City, Thomas Dutka and his wife Lynne of Marlborough, CT and Nancy Stetson of Glastonbury, CT.  In addition, he had 4 beloved grandchildren Nicole Boudreau and her husband Adam Abelson, Joseph Boudreau and his wife Shayna, Hannah Stetson and Lauren Stetson and 2 great grandchildren Edythe Boudreau and Drew Boudreau.  He also leaves his sister Mary F. Dutka of Griswold, CT and was predeceased by his siblings Joseph, Anna, Helen, Matthew and Angeline.

A Mass of Christian Burial will be celebrated on Monday June 10th at 10:00am at The Community of Ss. Isidore and Maria at St. Paul Church, 2577 Main St., Glastonbury.  Burial with military honors will follow at Holy Cross Cemetery on Hebron Avenue, Glastonbury.  Friends may call on Sunday June 9th from 2:00 pm to 4:00 pm at Mulryan Funeral Home, 725 Hebron Ave., Glastonbury. In lieu of flowers, memorial donations may be made to the Wounded Warrior Project, PO Box 758517, Topeka, Kansas 66675-8517

Share Your Memory of
Andrew
Upload Your Memory View All Memories
Be the first to upload a memory!