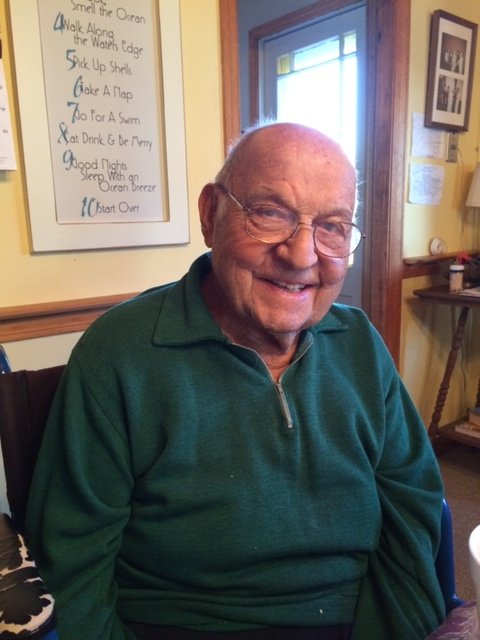 Dominick J. LaCava, 96, of Glastonbury, beloved husband of the late Annette (Guadiana) LaCava, died peacefully Wednesday July 31, 2019, surrounded by his dedicated family at his summer home in Westbrook. Born September 24, 1922 in Hartford, son of the late Pasquale and Carmella (Laraia) LaCava, he lived in Wethersfield for greater than 50 years before moving to Glastonbury 10 years ago. Dominick, a WWII veteran, proudly served in the US Army 398th Anti-Aircraft Artillery division. He aided in the war effort under General Paton, as a 1st class gunner.  After his honorable discharge, Dominick joined his family owned business. In 1951, he and Annette began their lives together. Prior to his retirement in 1980, he and his brother, Rocco, owned and operated P. LaCava & Sons a Scrap Metal and Iron Recycling Company. Dominick described himself to be a “happy warrior” while at work.  He is survived by his 5 children and their spouses; Patrick T. LaCava of Hartford, Luanne LaCava Treado and husband Robert of Southington, Carol-Anne LaCava Ghergurovich and husband John of Glastonbury, Joanne LaCava Foss and husband Mark of Glastonbury, Annette LaCava Giuliano and husband Frank of Berlin, 11 grandchildren and their spouses, Elisabeth Treado Cinque and husband James, Robert Treado, Jr., Jonathan Ghergurovich and wife Katelin, Jacklyn Ghergurovich Tobin and husband Kevin, Jennifer Ghergurovich, Joseph Ghergurovich, Gregory Foss, Timothy Foss, Seth Giuliano, Jacob Giuliano, and Sarah Giuliano, 7 great grandchildren and a sister Mary LaCava Pandolfe of Westbrook.   In addition to his love for his scrap yard, Dominick loved people. He entertained family and friends with his quick wit, and unending generosity. Small in stature, big in personality, Dom exuded a strong presence as a father, grandfather, great grandfather, and a friend to many, leaving a significant void in our lives with his passing.   With a heavy heart, we say goodbye, we will miss you, every day.   Friends may call at the Mulryan Funeral Home; 725 Hebron Ave., Glastonbury on Sunday, August 4, from 4-7pm. Funeral and burial will be private. In Lieu of flowers memorial donations may be made to the National Multiple Sclerosis Society, PO Box 4527, New York, NY 10163. For online condolences please visit www.mulryanfh.com.

Share Your Memory of
Dominick
Upload Your Memory View All Memories
Be the first to upload a memory!