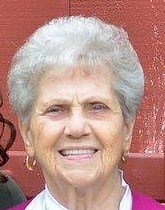 Pauline Mary (Boccaccio) Brancati, 89, the beloved wife of the late Nicholas Brancati, passed away peacefully, surrounded by her loving family on Wednesday, August 7, 2019 at St. Francis Hospital. Pauline was born in Hartford the daughter of the late Santo and Mariann (Liberto) Boccaccio and moved to South Windsor in 1961 to the house she resided in until her death.

Pauline could often be caught fondly reminiscing about growing up on Front Street with her 10 siblings and sharing stories from the good old days. Much of her life was spent instilling kindness on anyone she met. She will be most remembered from her 40 years of working in the cafeteria at Pratt & Whitney Aircraft  (retiring at the age of 80) where she touched thousands of people lives.   Her smile and caring way was infectious. Right up until the end Pauline kept herself busy baking, making sauce and her famous meatballs. She kept her hands busy crocheting blankets for family and for donations to Masonic Care. She volunteered for Foodshare, a local mobile food pantry, for many years.

She is survived by her four adoring children and their spouses; Paula and Daniel Troiano of South Windsor, Patricia and Robert Kasheta of East Windsor, Pamela and Michael Moynihan of East Hartford, and John and Melissa Brancati of Tolland; her loving grandchildren Kristina and Christopher, Vincent and Elle, Brittney and James, Nicole and Michael, Nicholas and Caitlin, Marissa and Kyle, Brianna and Luke, Ross, and Olivia. Her four great-granddaughters, McKenna, Ellison, Josephine, and Audriana, who loved their Gigi.

She also leaves behind her siblings; Rose Cassarino, Frances (Francis) Tebecio, Richard Boccaccio, Joseph Boccaccio, John Boccaccio and Fr. Michael Boccaccio.  Pauline will also be missed by her loving nieces and nephews and their families.

She was predeceased by her siblings Connie Salafia, Josephine Catalano, Santo Boccaccio and Salvatore Boccaccio.

Family and friends may call at the Mulryan Funeral Home, 725 Hebron Ave., Glastonbury on Sunday August 11, from 2-5 pm.  A Mass of Christian Burial will be 10:30 am, Monday, August 12, at St. Junipero Serra Parish in St. Francis of Assisi Church, 673 Ellington Road South Windsor.  Everyone is asked to meet directly at church.  Burial will follow in Wapping Cemetery, South Windsor.   Pauline made an impact on every person she met and with that in mind, in lieu of flowers, please send memorial donations, in her memory, to Foodshare of Greater Hartford, 450 Woodland Avenue, Bloomfield, CT 06002.

Share Your Memory of
Pauline
Upload Your Memory View All Memories
Be the first to upload a memory!