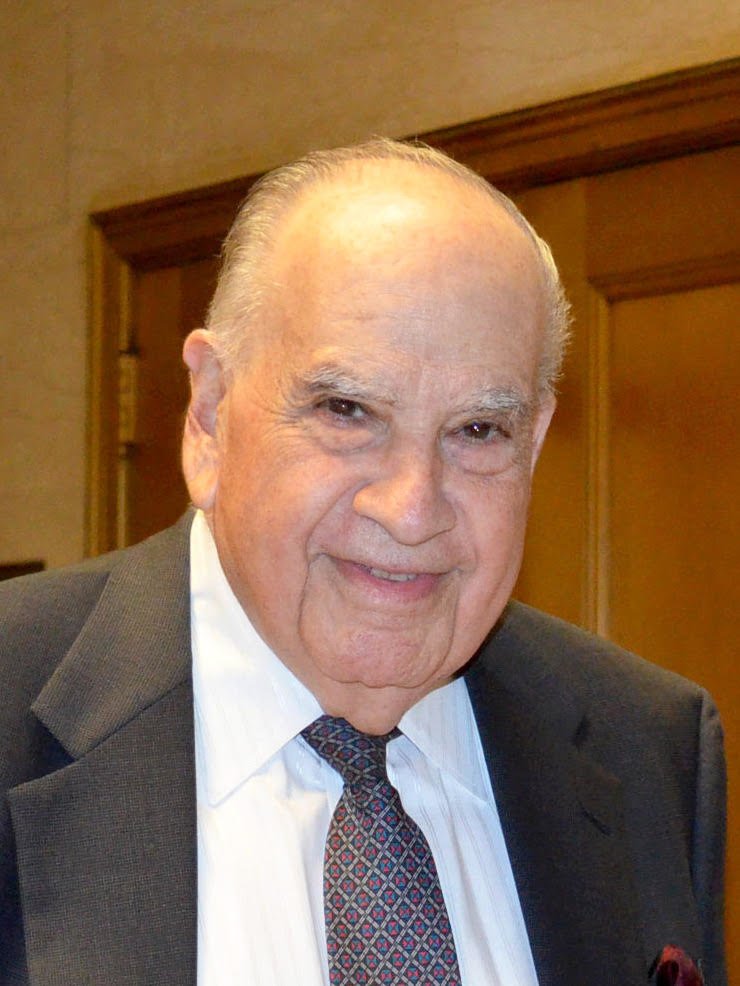 He was born in Hartford December 16, 1929, the fourth of five children born to Nancy (Petraglia) DeGemmis and Alfred DeGemmis Sr. -  who emigrated to the US from Ferrandina, Italy.  His parents took up residence in Glastonbury in 1931 and Al was raised in a house close to the town center.  He was a Glastonbury boy and then a Glastonbury man “through and through”.  He participated in many school and other local activities which contributed to his development as a boy and young man, followed by his role as an active citizen/leader and highly respected businessman.  He was a cherished friend to many and was the true pillar of his family - who celebrate a life so well-lived.

As a boy in Glastonbury - whether harvesting strawberries in local fields (age 9) or setting up pins in the local bowling alley (age 12)- Al relished all of his activities, and appreciated the rewards for a hard day’s work.  Meanwhile many of the childhood friendships he made lasted a lifetime.  He loved sports and the thrill of competition and during high school he played all the major GHS sports.  He was Class Athlete of 1947.

After graduating GHS, Al followed his deeply entrepreneurial instincts throughout his working career. He began his career with family members, first as owner/operator of a local dry cleaning and tailoring business (his father Alfred Sr. was a skilled tailor) but then transitioning to a full line men’s retail clothing business.  That business grew steadily and, as the “DeGemmis House of Clothing”, it was known for many years as a destination store in the Greater Hartford area with its reputation for quality brands and top-notch service.  Al and brother Nick were fixtures in the Glastonbury business community for 30 years, contributing to the town center’s development with construction of a beautiful, white brick building at 2450 Main Street which continues to this day.

He loved the clothing business, yet he also developed a keen interest in finance and investments.  This led to a career transition in his 40’s when he became a stock broker and ultimately a Financial Advisor.  He worked for several firms and lastly with Wells Fargo Advisors in Glastonbury.  He absolutely loved his clients and served them faithfully, while providing them a basis for financial security.  He relied not on a university education (which was not affordable for him after high school) but instead on the business and financial acumen that he developed as a successful business owner, plus years of hands-on investing experience.

Over the years Al participated in wide-ranging community efforts including St. Paul’s Church Building Committee (1950’s), Glastonbury Chamber of Commerce Board (1960’s), Glastonbury Center Redevelopment Commission (1970’s) and Board Member of Glastonbury Bank & Trust (1980’s-1990’s). More recently, following retirement at the tender age of 80, he served as a committee member for the preservation and upkeep of the Glastonbury Town Green – a place he loved.  And, during all of his years, he enjoyed a circle of close friends with activities including golf, New England racetracks, US and international travel, and continuing fandom for his favorite team since the 1930’s -  the New York Yankees.  Also remembered is that for many years Al and wife Helen maintained a second home in Bonita Springs Florida – providing the couple some well-earned time off and the opportunity for family and friends to visit.

Al loved his family dearly and he was especially devoted to his wife Helen (Senyk) DeGemmis, who pre-deceased him earlier this year.  They met as teenagers, married in 1952 and raised a loving family.  The couple celebrated their 68th anniversary in 2020.

He is survived by his four children, Alfred ll (Pamela) of Littleton MA, Mary Lee Shusta (John) of Petersham MA, Roberta of New York City and Thomas (Elise) of Scituate, MA and also by nine adoring grandchildren: Adrienne, Alfred, Julia, Liza, Robert, Maria, Courtney, Meghan, Brett and two great granddaughters, Lula and Amara.   Al is predeceased by two of his four siblings (brother Nick and sister Elvira) and is survived by two sisters (Lillian and Gloria).  He is also survived by his sister-in-law Dorothy Glista and by many beloved nieces, nephews, extended family and friends.

A Mass of Christian Burial will be celebrated for Al on Wednesday April 28, 2021 at 10:00 am at Ss. Isidore and Maria Parish at St. Paul Church, 2577 Main Street, Glastonbury, to be followed by a burial ceremony at the Green Cemetery. Friends may call from 5:00 pm to 7:00 pm on Tuesday April 27, 2021 at the Mulryan Funeral Home, 725 Hebron Ave., Glastonbury. In order to adhere to current COVID 19 mandates, masks are required and six feet of social distancing will be maintained.

Share Your Memory of
Alfred
Upload Your Memory View All Memories
Be the first to upload a memory!
Share A Memory