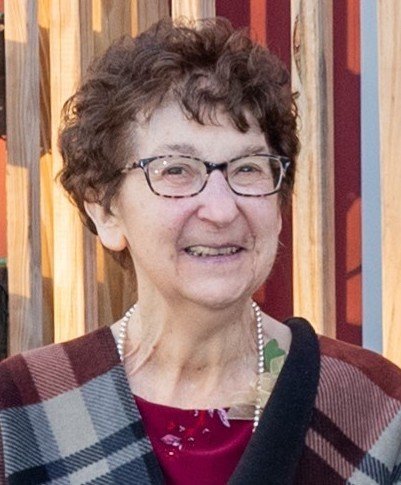 Patricia A. Cofiell (Rau) “Pat”, 86, passed away peacefully in Glastonbury, CT on May 3, 2021.  Born on August 20th, 1934 to the late Frank W. and Rosa (Lagel) Rau. She spent her entire life in Connecticut.  She was raised in Vernon/Rockville CT and spent her entire married life in East Glastonbury, CT.  Pat was married to John L. Cofiell “Jack” for over 65 years (Wed on August 7, 1954) until his death April 11, 2020.   She was a 1951 graduate of Rockville High School in Vernon, CT.  Pat was honest and hard working with an adventurous spirit. She lived her dreams vibrantly including being a mother, business owner, and world traveler.

After marrying Jack and beginning her family with the birth of John L. Jr. “Jay” in 1955 and Brad K. in 1957 she worked as a keypunch operator, followed by working as a secretary at Peerless Woodworking of East Glastonbury.  After the birth of Toby A. in  1965 and Kristen L. in 1967 she began working for her husband at C & B Electric. Though Pat was never the “stay at home mom” type, she always made sure that she made dinner for her family, and everyone was expected to be there to eat together.

In 1969 Pat and Jack decided to open Cofiell’s Arctic Cat in the basement of the East Glastonbury Post  Office.   Jack maintained the Electrical Contracting business while Pat worked full time at Cofiell’s.  Pat was joined by eldest son Jay, who was still a high school student.  Cofiell’s soon outgrew the small shop in East Glastonbury and moved to New London Turnpike in the town center.   They added more products including lawnmowers, tractors, chainsaws, snowblowers, and more.   Cofiell’s added even more products and brands in the 80’s, outgrowing the New London store and moving to the present location on Kreiger Lane.  Son’s Jay and Toby worked alongside their mother until she retired in 2019.

Pat was formerly a member of the East Glastonbury Volunteer Fire Department Women’s Auxiliary.  She was a founding member of the Woodford SnoBusters, and could often be found at her home in Woodford VT and riding on the hundreds of miles of groomed snowmobile trails. She held varied board positions with the SnowBusters and enjoyed helping to organize many events for club members and the community.

Pat enjoyed snowmobiling, boating, bowling, and reading the Hartford Courant (and doing the puzzles).   She was an integral piece in the success of both sons Jay & Brad’s snowmobile racing careers.  She was proud of her children and grandchildren for their personal and professional accomplishments.

Jack and Pat had a wonderful and adventurous life together.  They traveled the continental United States, Alaska, and Canada extensively by RV.  They enjoyed many snowmobile trips with family and friends throughout Vermont, Maine, New York, Montana, Minnesota, and Canada. They vacationed in Europe and took trips and cruises with friends to a variety of memorable places.  Other adventures included Snowmobiling in Yellowstone Park, Jackson Hole,  and the North Rim of the Grand Canyon, whitewater rafting in the Grand Canyon, and cycling down the mountain in Haleakala National Park in Hawaii.  Pat also did a tandem jump out of a plane!

She leaves behind her beloved grandchildren,  Kevin & his wife Caitlin Cofiell of Glastonbury, Kelly and her husband Corey Turner of Glastonbury, Brennan and his wife Hannah Cofiell of West Marlborough, VT, Erin and her husband Alex Barker of Williston, VT , Mallory and her partner Sean Davis of Pittsboro, NC., and Ethan of Philadelphia, PA.    She was also blessed with 6 great-grandchildren, Paige, Annabelle, & Jacob Turner, Madelyn & Quinn Cofiell, and Huxley Cofiell.  Her beloved Havanese dog Cha Cha will miss her. She was predeceased by her  husband Jack, all nine of her siblings and Grandson Kyle.

A celebration of Pat & Jack’s life together will be held from 4 to 7pm on Thursday, May 20th at Mulryan Funeral Home in Glastonbury, CT. . In order to adhere to current COVID 19 mandates, masks are required and six feet of social distancing will be maintained.    In lieu of flowers, memorial gifts in Pat’s name may be made to the Woodford SnoBusters PO BOX 333 Shaftsbury, VT 05262.

Share Your Memory of
Patricia
Upload Your Memory View All Memories
Be the first to upload a memory!
Share A Memory