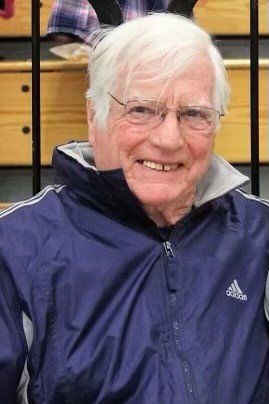 “Coach” Grogan passed away peacefully on June 8, at his home in his beloved town of Glastonbury. He had his loving family by his side as he walked off the court for the last time. “Coach” taught physical education at Glastonbury High School for 37 years, and he coached just about every sport during that time. He was known for his rapport with students, and his patience, understanding, and empathy for everyone. He leaves behind the love of his life and wife of 62 years, Carol Bletzer Grogan, his children, Lisa Shaw (and husband Lee), Paul Grogan Jr (and wife Kim), Jeff Grogan (and wife Lynn), Kelly Clarke (and husband Dave), 10 grandchildren (Jeremy, Spencer, Caleb, Kasey, Cara, Michael, Maire, Aine, Bridget, Kevin, great grandson Owen), and hundreds of former students whom he guided through their high school journeys. To drive through town or go to the store with him was like being with a rock star. Former students and friends would just beam when they saw him, and everyone had a story of an experience with him that they fondly shared while reminiscing of good times at GHS. It seems every kid dreamed of beating him and his great friend Coach Mehler at badminton, but no one ever did.

Coach was born on December 20, 1932, in Worcester, Massachusetts. He graduated from Worcester Academy, where he gained a scholarship to play basketball. He was a standout baller. He went on to play basketball for Springfield College on an athletic scholarship. Upon gaining his teaching degree he got his first and only teaching job in Glastonbury. For him, getting out of the city and living in Glastonbury was a huge achievement. Shortly after, he met Carol Bletzer, who was a recent graduate of GHS. Carol scoped out the hot new teacher, pretended to be a newspaper reporter, and ”interviewed” him for a fake article. Not much later, they were married. The rest is history. They were a strong partnership for 62 years!

While teaching at Glastonbury, Grogan played semi-pro basketball for the East Hartford Explorers. He earned $5 a game playing in gymnasiums up and down the country with and against players such as the great Bob Cousy, who went on to star in the ABA and NBA, and against the world famous Harlem Globetrotters. He was a white player who was proud to play on an integrated team. For his career on the court and behavior off it, Grogan was enshrined in the Explorers Hall of Fame in 1991.

Coach Grogan enjoyed spending time in the northern woods of Vermont and New Hampshire and relaxing at his “camp” in the Berkshires of Massachusetts. He loved taking his family for evening drives to stop at the country store for a hunk of cheddar cheese and penny candy, then look for wildlife in the fields and forests along the roadside. He instilled his love for nature and the outdoors in all of his children and grandchildren. While he enjoyed these excursions, his love for Glastonbury was primary, and these trips usually ended abruptly so he could return to the place he loved so much and be with the people he loved in his community.

A celebration of his life will take place at the Glastonbury Elks Club, Friday, June 18, from 5:00-9:00 PM. A toast will take place at 6:00. In lieu of flowers, donations may be made to the American Cancer Society, or to the Connecticut Chapter of the Alzheimer’s Foundation, in honor of his beloved wife.