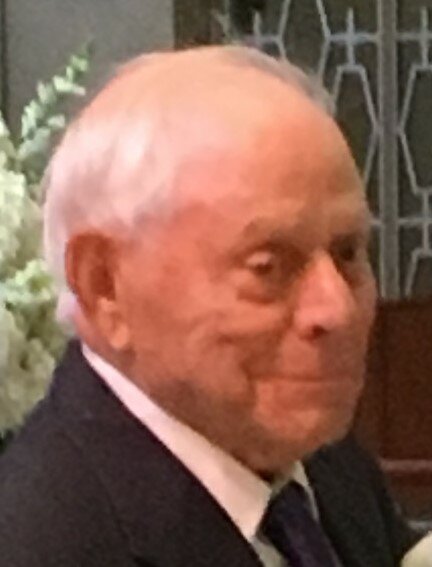 Walter “Wally Gator” J. Stanley, 96, of Glastonbury, husband of the late Helen “Betty” (Pierce) Stanley, died Tuesday October 5, 2021 at Salmon Brook Nursing Home. Born October 14, 1924 in Glastonbury he was a life-long resident who’s family originally developed and resided on Stanley Drive. Prior to his retirement he worked in the circulation department at the Hartford Courant for 25 years and was a builder of many fine homes in Glastonbury and the surrounding towns. Walter served in the US Navy during World War II. He flew in the Blimp Squad over the California coast looking for enemy subs and then served on the USS Saratoga. After surviving the bombing of the USS Saratoga, Walter was hospitalized in California and loved to share the stories of hospital visits from Lana  Turner and The Andrews Sisters escorting him out, arm and arm, upon his discharge.  He was an avid (and boisterous!) UCONN Women’s Basketball fan and New York Yankees fan. He is survived by his daughter Donna Henrikson and her husband Fred of Glastonbury, His sister Nancy Brault of Portland, CT and his Daughter-in-Law Debbie Stanley of Middletown, CT. He is predeceased by his son, Gary Stanley (His Yankee Fan partner), his brothers Ernest Stanley and his wife Jane, Sterling Stanley and his wife Adeline (best friend to Betty Stanley) and his sister Marie Whatley and her husband Bill Whatley.

He was “Papa” to his five grandchildren, Beth Kratzert, Laura Hamlin, Chris Henrikson, Danny Stanley and Stevie Stanley.  He enjoyed many vacations with them on Cape Cod and Martha’s Vineyard, in addition to teaching most how to swim, fish, camp, hunt night-crawlers, etc. He carried on as Papa to the next generation for his six great-grandchildren, many of whom he and Betty babysat and cared for regularly …Sara Greenleaf, Gregory Pancavage, Kyle Hamlin, Jacob Hamlin, Callie Stanley and Maya Stanley. Walter also leaves behind his life-long friend, hunting partner, and friend to all of our family, Phil Mitchell of Glastonbury.  Funeral and burial services will be private. Memorial donations may be made to the Glastonbury Historical Society, P.O. Box 46, Glastonbury, CT. 06033. For online condolences please visit www.mulryanfh.com.

Share Your Memory of
Walter
Upload Your Memory View All Memories
Be the first to upload a memory!