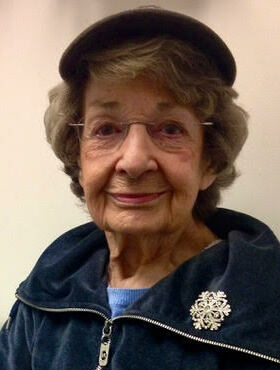 Gloria Jane Sercombe passed away peacefully of natural causes on January 20, 2022, surrounded by her children, family members, and longtime health aides.  Gloria resided at The Arbors of Hop Brook in Manchester, CT for ten years prior to her death.  She was 94 years old.

Gloria was born in Kansas City, MO on October 21, 1927, to Spencer and Helen Norris.  She grew up in Kansas City, attended public and private schools there, and graduated from the University of Missouri in 1949 with a Bachelor of Science degree in Education.  In 1971, Gloria earned her Master of Science in Education from Central Connecticut State College. While in college, Gloria met Bill Sercombe, a student and returning veteran, and the couple married in 1948.  Gloria and Bill moved to Kansas City in 1950, where they lived until 1961, when they moved to Glastonbury, CT.  Gloria and Bill had four children.  They were married for 44 years until Bill’s passing in 1992.

In 1955, Gloria began her career in early childhood education in Kansas City, no small feat for a mother of four children at a time when most mothers eschewed professional ambition.  She taught kindergarten and second grade at Hebron Avenue School in Glastonbury from 1961 to 1989.

Gloria brought passion, industry, creativity, and discipline to her teaching career and to all that she did.  She greatly enriched the lives of her students, family members, and friends, dedicating her life to their betterment, and generally subordinating her needs to theirs.

Gloria was a devout Catholic and committed to the fellowship of the congregation of St. Dunstan’s Church for many years.  She was active in the Glastonbury community, served in leadership positions in the Glastonbury Garden Club, and supported many local and national nonprofits.

Gloria was a lifelong fan of the Boston Red Sox and the UConn Huskies women’s basketball team. She was an avid gardener and enjoyed countless hours in the garden, planting flowers and shrubs, and listening to the Red Sox, win or lose.

In retirement, Gloria enjoyed traveling, visiting other countries, and taking trips with her teacher friends to the Southwest, where she developed an appreciation for Native American arts and culture. She also enjoyed visiting and entertaining family and friends, sharing laughter, conversation, and joy with them.

One of Gloria’s favorite pastimes was shopping for clothes. She maintained a colorful and coordinated wardrobe with hats and shoes to match every outfit she owned. She loved to play bridge, and grew to value the theatre and the arts, attending the Hartford Stage and Bushnell Theater frequently with friends. Gloria had many pets along the way, but more than ever, enjoyed the company and comfort of her beloved calico cat, Chloe, during her final years.

She was especially close to her sister, Mary Wurth, and Mary’s family, and over the years, made a concerted effort to visit her regularly in Wichita, KS.

Gloria will be remembered for her intelligence, wit, and gift of gab. She was well-read, conversant on many topics and a talented and imaginative writer. She maintained her dignity and sense of independence well into her final days, reminding everyone who cared for her of her preferences and choices! The family offers heartfelt gratitude to her caregivers, who nursed her and doted on her everyday needs, her happiness and overall well-being.

A mass of Christian Burial, officiated by Father George Couturier, will be celebrated on Friday, April 1, 2022, at 11:00 AM at St. Dunstan’s Church, 1345 Manchester Rd., Glastonbury CT. There are no calling hours. Following the mass, there will be a reception in the Father Bannon Hall of St. Dunstan’s Church. Funeral services will follow at the Holy Cross Cemetery, located at 1318 Hebron Avenue in Glastonbury, Ct.

In lieu of flowers, memorial donations may be made to St. Dunstan’s Church. For online condolences, please visit www.mulryanfh.com

Share Your Memory of
Gloria
Upload Your Memory View All Memories
Be the first to upload a memory!
Share A Memory