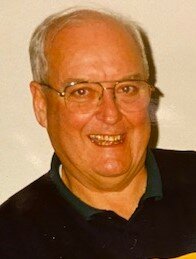 Paul F, Hass, Sr., died Friday April 22, 2022. He was the son of the late Joseph and Elizabeth (Ryan) Haas, was born in Union, NJ. October 4, 1929. He was pre-deceased by his brother Joseph and sisters Dolores and Margaret. He is survived by his brother William.  Paul lived life to the fullest and departed gracefully with his family at his side. He leaves his wife of 68 years, Margaret “Peggy” Haas. In the last several months of his life his sole focus was to spend more time with Peggy.  Paul and Peggy met while he attended Seton Hall University.  He was a veteran of the Korean War.  Paul’s life was marked by love in action fulfilling the words of his namesake, St. Paul. He lived the characteristics of love daily by being patient, kind, humble, selfless, honest, and forgiving. Paul was an insurance agent for Allstate for 47 years. He was active in the community serving on the Connecticut Housing Finance Authority, State of Connecticut Safety Commission, Glastonbury Planning and Zoning, Glastonbury Chamber of Commerce and church parish councils in West Hartford and Glastonbury. Paul loved sailing, starting as a young boy on Indian Lake, NJ, and then later sailed Narragansett Bay during summers. He shared that love with his family during many long summer sails. He retired to his summer home in 2001 landscaping the property, walking and talking to friends on the beautiful horseshoe beach. Paul leaves behind four children, seven grandchildren and two great grandchildren. Paul Haas, Jr (Doreen), Timothy Haas (Gayann), Peter Haas (Vicki) and Margaret Donovan (Todd). Grandchildren: Catherine Jalowiec (Ryan), Andrew Haas, Stephanie Haas, Madison Haas, Benjamin Haas, Caitlin Donovan and Thomas Donovan. All will miss him dearly.  Paul enjoyed bible study and participated in several groups: Sts. Isadore and Maria (Glastonbury), St. Patrick-St. Anthony (Hartford), and St. Thomas More (Narragansett). He passed his deep and abiding faith onto his children. During his last months, he was able to share his faith with his caregiver Gus Ayensu, to whom the whole family is very grateful. Many thanks to the nursing staff and Hospice Team at Hartford Hospital for guiding Paul and the family through this emotional time. A mass of Christian Burial will be celebrated on Friday April 29 at 11am in Ss. Isidore and Maria Parish at St. Paul Church, 2577 Main St. Glastonbury. Burial will follow in Holy Cross Cemetery, Glastonbury. Friends may call at the Mulryan Funeral Home, 725 Hebron Ave., Glastonbury on Thursday April 28 from 5-7pm.   In lieu of flowers, please consider donating to the House of Bread, https://www.hobread.org/  For online condolences please visit www.mulryanfh.com.