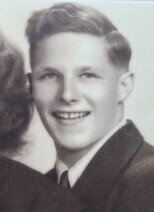 Walter K. Smith, 94 of South Glastonbury, husband of late Lorraine (Pfau) Smith, passed away peacefully on June 4 at Middlesex Hospital. Walt was born on May 27, 1928, in Unionville and was fondly known as Smitty or Squiggles. He was the son of the late Conway and Hazel (Knibbs) Smith and the oldest of four siblings.  He grew up on the family farm where he milked the herd of cows and got in trouble for jumping from the barn into the hay bails. Riding his little tricycle spurred his life-long interest in keeping all manner of vehicles in good repair. He graduated from riding a trike and farm tractors to a  ‘36 Chevy upon receiving his driver’s license.

When his family moved to East Glastonbury, he helped deliver milk as a teenager. He met his wife of 68 years, Lorraine, at a square dance. Upon marrying, they lived in a rehabbed chicken coop until he joined the National Guard where he was assigned to the motor pool on an army base in Georgia. Upon being honorably discharged in 1951, Smitty, Lorraine, and their little Georgia peach – Lee – moved to Lorraine’s hometown of South Glastonbury, where they became faithful members of the South Glastonbury Congregational Church and the local Square Dance club. Smitty was also a longstanding volunteer for the South Glastonbury Fire Department.

Smitty honed his skills as a car mechanic at many garages before working for Northeast Utilities where he helped to keep the fleet of trucks in good repair.  His expertise fueled his passion for building race cars. His first and favorite stock car was named the Silver Six (aka the Flying Jimmy). His goal was to prove that a lowly GMC 6-cylinder truck engine could compete with V8 engines and take the checkered flag. As one of his friends declared, "He is MY hero, a little guy competing with the V8s is outstanding." He went to great lengths to prove his point and won his fair share of races.

He later built a second race car, also called the Silver Six, to compete on the NASCAR circuit with a GMC engine rescued from the Maine woods, complete with a family of writhing snakes. Both race cars had many loyal fans who looked forward to hearing the car’s mighty backfire each spring. Every weekend became a neighborhood event as the car was loaded onto the trailer and hauled to a Connecticut speedway. Smitty’s racing “career” saw him through his early 90s but ended prematurely when his “secret” plan to reengineer the race car with titanium pistons (kept under his bed for safekeeping) was foiled by his physical limitations. Thankfully, his life-long passion inspired some younger friends to build “junior silver sixes.”

Smitty was one in a million. He was a sweet and generous man whose special talent lay in being a good person, the best father and grandfather, a loyal friend, a helpful neighbor, and an expert mechanic. His legacy includes many stories of his kindness, harrowing tales of climbing on the roof in his old age, and using and maintaining his fleet of snow blowers and lawn mowers long past their prime (and his).  His fierce independence and stubbornness kept family members busy in efforts to keep him safe. He would sometimes complain that he had too many bosses; three weeks before he passed, they learned that he was scheming to mow his yard in the middle of the night. In addition to many poignant memories, he leaves behind a garage filled with crankshafts, engines, and car parts.

Smitty’s family is thankful to everyone who cared for him. The long list includes neighbors who helped get him on his feet when he fell in the yard; who cleared the driveway of snow when he could no longer tinker with his snowblower; who helped load his race car on the trailer so he could take it to car shows; who called or visited; and who cared for him in his last days at Portland Care & Rehab Center and in Hospice at Middlesex Hospital.

Smitty is survived by his two daughters, Lee Smith of St. Louis, and Jill Beckett and her husband Chip Beckett of South Glastonbury; and two grandchildren, Leah Beckett and her husband Sean Tierney of Cambridge, MA, and Clayton Beckett of South Glastonbury.  He also leaves behind several adoring nieces and nephews (and their children) who stood with him as his health declined. He is predeceased by his wife Lorraine; Lee’s husband, Joseph Battle; and Smitty’s parents and siblings, Robert Smith, James Smith, and Barbara Marsh; and some dear friends.

A Graveside service will be held on Wednesday, June 8, 2022 at 11:00 am at Green Cemetery, 99 Hubbard St., Glastonbury. Friends may call on Tuesday, June 7, 2022 from 4:00 pm to 6:00 pm at Mulryan Funeral Home, 725 Hebron Ave., Glastonbury. A service to celebrate Smitty’s life will be held in September. For those who wish, donations may be made in Smitty’s memory to the Congregational Church of South Glastonbury, 949 Main St., South Glastonbury, CT 06073 or Foodshare, 450 Woodland Ave., Bloomfield, CT 06002 in Smitty’s memory. For online condolences, please visit www.mulryanfh.com.

Share Your Memory of
Walter
Upload Your Memory View All Memories
Be the first to upload a memory!
Share A Memory