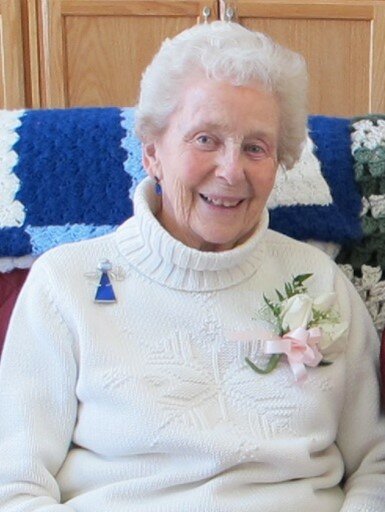 Jane graduated from the University of Vermont in 1952 with a B.S. in Political Science and from Rensselaer Polytechnic Institute in 1977 with a M.S. in Management Science.  She was a full-time mother to her five children while they were young and also a substitute teacher. Jane worked for MassMutual Insurance Co. in corporate personnel training before moving to the company’s sales division for field training and development. She developed a highly successful interactive video training program. She then became Vice President of Personnel and Placement before being lured away by Aetna Insurance Co. to introduce the same training program to their agents. She retired as Vice President in 1995.

Jane was an active congregant and choir member at the First Congregational Church, United Church of Christ (UCC) in Rochester, NH from 1961-1967, followed by the First Church in Newton, UCC in Newton Centre, MA from 1967-1974, and Center Congregational Church, UCC, Manchester, CT from 1974-1992, all churches where Newell was the pastor. She was also active in the New Hampshire, Massachusetts, Connecticut and Rhode Island Conferences of the UCC.  In NH, she was Co-director with Newell of a Conference Family Camp.  In MA, Jane was co-director with Newell of the summer youth conference. After retiring to Block Island, RI, Jane was co-coordinator with Newell of the RI UCC Conference Disaster Preparedness planning program. They attended disaster training at FEMA Headquarters in West Virginia, and Trauma Training for Disaster Ministries at Eastern Mennonite University in Virginia. They went to New Orleans following Hurricane Katrina to help with the clean-up and reconstruction. Jane was active in government issues including women’s rights, and human rights, marching against the Vietnam War in Washington DC and the Boston Women’s March in 2017.

Jane and Newell enjoyed traveling around the world, including trips to Europe, Africa and the Cook

Islands. They were also involved in many musical productions while living on Block Island, which raised money that made it possible for Block Island children to take music lessons. Jane loved watching the Red Sox and UConn women’s basketball.  She was an avid seamstress and smocker making clothes for her young daughters and granddaughters. Since 2010 she loved to work at Mary and Peter’s farm in North Windham where she was involved in planting, ran the farmstand, made the jam and beautiful flower arrangements, and finally became a tractor driver at 87 years old (her father, also a farmer, would be proud).

The Curtis family would like to thank all the wonderfully caring staff at Ocean Meadow Memory Care Home in Clinton, CT for their loving and dedicated care of our mother during her last six months. You are all simply amazing!

A memorial service will be held in celebration of her life at South Glastonbury Congregational Church, 949 Main St, South Glastonbury, CT 06073, on July 23 at 1 pm followed by a reception at the church in the Social Hall. Burial will be in the Memorial Garden at the church. In lieu of flowers, donations may be made in her memory to Silver Lake Conference Center of the CT Conference of Churches at www.silverlakect.org; or the Center for Reproductive Rights at https://reproductiverights.org/

Share Your Memory of
Jane
Upload Your Memory View All Memories
Be the first to upload a memory!
Share A Memory