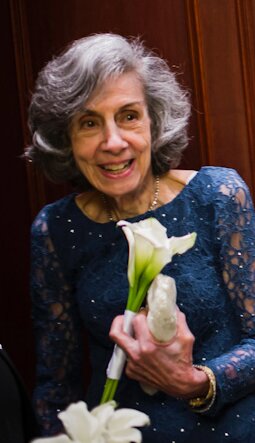 Joan Heston passed away peacefully on November 20, 2022, in her home in Farmington, CT at 97 years old. Born on September 20, 1925 to Esther and Max Yudowitch, Joan grew up in Hartford, CT with her two brothers, Elmer Young and Kenneth Yudowitch. She attended college at Pratt Institute and studied at The Art Students League. In New York, she worked at Vogue and met her husband Charles Heston. They lived many happy decades in Stamford, CT until his death in 2012.

Joan was an accomplished and respected artist. She worked in several mediums, mainly oils and watermedia, and her work was described as Contemporary Expressionism. She was listed in “Who’s Who in American Art”, “Who’s Who in the World”, “Who’s Who in America” and “Who’s Who in the East.” She held elected membership in many prestigious organizations including Allied Artists of America (former President), National Arts Club, Audubon Artists, Catharine Lorillard Wolfe Art Club (former Board Member), Connecticut Academy of Fine Arts, Silvermine Guild of Artists (former member of Board of Trustees), National League of American Penwomen (Past VP), Connecticut Watercolor Society, etc. and was the recipient of over 60 awards including Gold and Silver medals and The Traveling Exhibition of AWS. She was honored by the National League of American Penwomen with “The Award of Excellence For Achievement in Art.”

Joan was published in several books and articles in the U.S. and in Europe, including in “The Artists Magazine” and “Disengnare & Dipingere” in Italy. She juried numerous national exhibitions and exhibited in museums, galleries and universities in New York and across the country. In addition to painting, she conducted international workshops, lectures, and critiques, and taught at Silvermine School of Art.

In her last decade of life at Brookdale Gables in Farmington, CT, Joan was a well liked and well respected resident who enjoyed contributing to the community newsletter and discussion groups.

The funeral will be private. In lieu of flowers, donations may be made in her memory to Pratt Institute via https://giving.pratt.edu/. For online condolences, please visit www.mulryanfh.com.

Share Your Memory of
Joan
Upload Your Memory View All Memories
Be the first to upload a memory!
Share A Memory