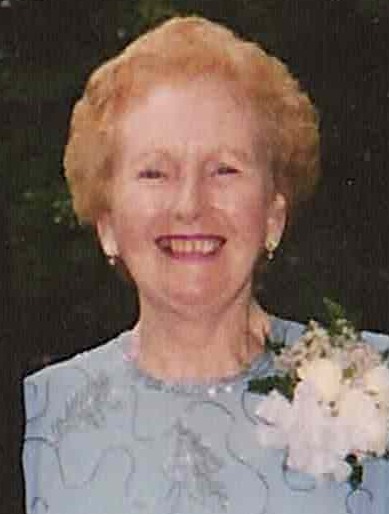 11:00 am
Our Lady of Peace Church
370 May Road
East Hartford, Connecticut, United States

Nora Theresa O’Connor, of East Hartford, passed away Wednesday (November 30, 2022).  Born on October 28, 1926, in Inagh, County Clare Ireland to John and Mary Tuttle.  She immigrated to the United States in 1948 and initially resided in Boston while becoming a citizen of the United States.   Nora met the love of her life, Thomas O’Connor, in 1956 at an Irish dance hall in Boston.  They were married in St. Ignatius Church, Chestnut Hill, Boston on October 10, 1959.   Nora and Thomas made their home in East Hartford, CT.   Nora worked many years as a caregiver to the elderly and always knew how to comfort others.   Nora was well known for being an excellent cook, hardworking, homemaker, and an excellent mother and grandmother.   She was also an avid baker which was a passion of hers.   Nora was very proud of all her children’s and grandchildren’s achievements.   A resident of East Hartford she became a parishioner of Our Lady of Peace Church.   Nora was predeceased by her husband Thomas, who passed away in 2013.  Nora leaves four children, Kevin O’Connor of East Hartford, Joseph O’Connor and wife Joanne of Hebron, Dennis O’Connor of Glastonbury, and James O’Connor of Glastonbury.  She also leaves six grandchildren: Caleigh, Dylan, Ryan of Hebron and Thomas, Quinn, and Jack of Glastonbury.   Nora was predeceased by her siblings, Thomas, Mary, Ann, Martin, Nellie, John, Mick, and Patrick.   Nora is also survived by her beloved sister-in-law, Peg O’Connor, of Glastonbury along with several nieces and nephews in the United States and in Ireland. In accordance with Nora’s wishes, there will be no calling hours and her funeral will be private. A Mass of Christian Burial will be celebrated on Monday, December 5, 2022 at 11:00 am at Our Lady of Peace Church, 370 May Rd., East Hartford, Connecticut. Burial will be in Holy Cross Cemetery, Glastonbury. A celebration of life ceremony will take place at a future date.  In lieu of flowers the family requests that donations be sent in Nora’s name to the Irish American Scholarship Fund, 132 Commerce St., Glastonbury, CT 06033.  For online condolences please visit www.mulryanfh.com.

Share Your Memory of
Nora
Upload Your Memory View All Memories
Be the first to upload a memory!
Share A Memory