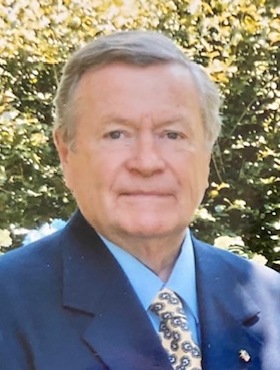 Francis McKeon (Mac) Buckley, beloved husband for 56 years of Donna Ricciuti Buckley died on April 11, 2022 surrounded by his devoted family. Born November 22, 1941, in New Haven, CT, he was the son of the late Mr. Christopher H. Buckley and Margaret Elaine McKeon Buckley. He was a graduate of Archbishop Stepinac High School in White Plains, New York, the College of the Holy Cross, and Georgetown University Law Center.

Mac began his legal career in 1967 as a law clerk to the Honorable John P. Cotter, Justice of the Connecticut Supreme Court. He later joined the Stamford office of Cummings and Lockwood as a litigation associate.  In 1969 he became an Assistant United States Attorney until 1972 when he was appointed to serve as an Assistant Federal Defender for the District of Connecticut. Later that year, he was appointed as a special federal attorney heading the regional office of a national drug enforcement program, the Office of Drug Abuse Law Enforcement (ODALE). Mac entered private practice in 1974 with his law partner and friend, Hubert J. Santos, forming Buckley and Santos in Hartford. Later, he practiced law with his daughter, Moira Buckley.

Mac had many interests outside of the practice of law, one being politics. In 1974 he was the Republican candidate for the First District Congressional seat, running against and losing to incumbent William R. Cotter. From 1975 to 1977 he served on the Newington Town Council.

Mac was passionate about boxing and coaching young people. He began boxing at an early age, continued throughout college, and started coaching boxers while he was in law school. In the early 1970s, first in conjunction with the Police Athletic League and then independently, Mac ran a Hartford boxing gym in Charter Oak Terrace, which became the Nelson-Anderson Memorial Boxing Club. He later joined his friend Johnny Duke to train fighters in the Bellevue Square Boys Club. Over the years, he trained some of Hartford’s best amateur and professional fighters. In 2004 he and his dear friend, Troy Wortham, a former professional boxer, founded Championship Rounds Boxing and Books, an after-school boxing program in Hartford. In 2010 Mac was inducted into the Connecticut Boxing Hall of Fame. In addition to training boxers, Mac helped establish the Connecticut Rising Stars, an AAU basketball team out of the New Britain Boys and Girls Club. He was fiercely dedicated to helping and influencing the future of those he coached and became a father figure to many young men.

Above all, Mac was a beloved husband, father, and grandfather who valued time with his family. Mac, Donna, and their five daughters shared the work on their Black Angus cattle farm and enjoyed showing the animals at local fairs. He faithfully attended his daughters’ sporting events and loved fishing, gardening, and playing tennis with his grandchildren.

The Buckley family would like to thank the staff at Middlesex and Hartford Hospital and Hartford Healthcare Hospice, who provided compassionate care to him and his family.

Share Your Memory of
F. Mac
Upload Your Memory View All Memories
Be the first to upload a memory!
Share A Memory